Ooni of Ife visits the Oldest African Temple in Brazil

Fiocruz received the visit of the king of the Yoruba peoples, Ooni of Ife, Oba Adeyeye Enitan Babatunde Ogunwusi Ojaja II, and his entourage on June 13. He came to visit the Foundation and participate in the opening panel of Brazil-Nigeria Colloquium, organized by the House of Oswaldo Cruz (COC). Prior to the Colloquium, at Fiocruz Castle, the king met with Marco Menezes, Vice President of Environment, Healthcare and Health Promotion (VPAAPS), who at the time represented the President of the institution, to discuss possible Brazil-Nigeria scientific cooperation.

Ooni of Ife is the king of the city of Ife, considered the cradle of the Yoruba people and the first African kingdom. He is also a religious authority for the Yorubas. On his first visit to Brazil, he came to bring an intercultural message against religious intolerance and also to strengthen ties between what he considers “sister nations”. The trip was part of the International Decade for People of African Descent, 2015-2024, established by Unesco.

“Nigeria is the country with more black people in the world. In second place is Brazil”, Ooni emphasized, noting also that many black Brazilians have Yoruba origin, but were separated by slavery. His visit also had the purpose of rescuing that identity and pride in the descendants of his people. 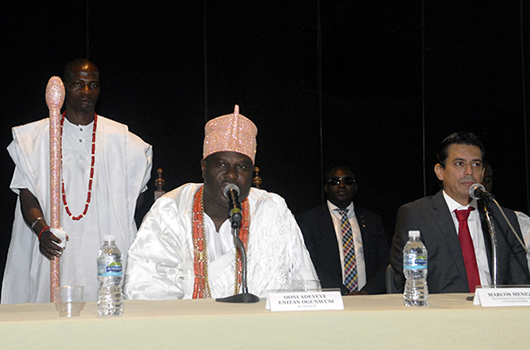 The king talked about Fiocruz and the possibility of a partnership between the institution and Nigerian organizations such as the House of Oduduwa Foundation, he was particularly interested in the exchange of traditional knowledge, especially on herbs and herbal medicines, and in learning community health strategies.

In sharing the view on health and healing, the king explained that, for the Yorubas, everything that we are experiencing has been experienced previously by our ancestors, including diseases. “God created the diseases, but He also created the solutions. And they are in nature, it is up to mankind to find them,” he stated, emphasizing the importance of the Orishas in this process. According to the Yoruba mythology, Orunmila is a doctor who retains ancestral knowledge, and Osanyin is the pharmacist who keeps knowledge of herbs and their cures.

“I am a living testimony to the efficacy of this knowledge. Since taking over the throne, I have never taken a medicine other than herbs,” the Ooni of Ife added.

During the opening panel of Brazil-Nigeria Colloquium, which had the theme Traditional Knowledge and Health and was attended by Nigerian scientists and intellectuals who are members of the king’s entourage, the dialogue with Fiocruz was announced to those present as one of the greatest successes of his visit to Brazil. The nature of Fiocruz as a leading institution in science is seen by the king as an opportunity to make this partnership have a global impact.

“It is an honor for Fiocruz to receive this visit and to strengthen relations with the African continent, especially Nigeria and the Yoruba people. Traditional Yoruba culture is part of what we recognize as the broad concept of health,” Marco Menezes stated. He also stressed that the Foundation already has the practice of respecting traditional knowledge in its relationship with science. 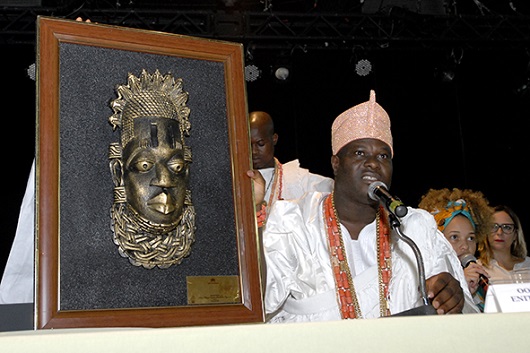 To celebrate the partnership, Ooni of Ife offered a gift to Fiocruz that, in his words, symbolizes protection. “What you are doing is for the whole humankind. You are the protective agent of the human race. This gift symbolizes the protection of the head, which, we believe, is very important to protect the entire body,” he explained.

On the afternoon of the same day a group of intellectuals, scientists and religious authorities from Nigeria and representatives of Fiocruz met at the Official Residence, on the Campus of Manguinhos, to present Fiocruz Health Promotion experiences that included actions in schools and vulnerable communities, and continuing education courses for health professionals in remote areas of the country. Topics related to scientific exchange involving research on herbal medicines and health promotion actions were addressed, including community health courses. 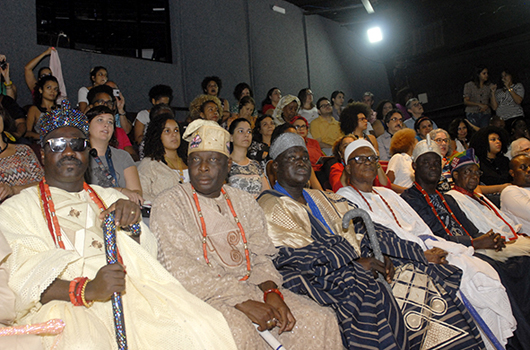 The exchange between traditional Yoruba and Brazilian indigenous knowledge was a point of particular interest to Nigerians. Fiocruz researchers agreed, since this is also an area of interest for the institution. “We do not know all the Brazilian biodiversity, the Amazon or even the Atlantic Forest,” Carlos Eduardo Grault said, advisor to the Office of the Vice President of Research and Biological Collections (VPPCB).

The issue of documentation of this knowledge has also been addressed. “Our knowledge is still very oral,” the representative of Nigerian TV, Ojaja TV, said. He showed interest in some books seen during the visit to Fiocruz.

Researcher Kola Abimbola of Howard University reinforced the importance of systematizing knowledge. “For every person who dies, an important knowledge dies with him/her,” he explained.

About this, Fiocruz clarified that in addition to the availability of the collection, it has research and laboratories in oral knowledge documentation that can integrate the partnership. In this sense, Luciana Garzoni, assistant to the Office of the Vice President of Environment, Healthcare and Health Promotion (VPAAPS), extended the invitation, previously made to Ooni of Ife, to all those present for the Meeting on Traditional Communities in Latin America, which is being organized by VPAAPS and will take place in 2019.

Abakuá members derive their culture from the Efik and Efo of the Cross River region in Nigeria, which…
byadmin

This Video: Nsibidi is an ancient African writing system from the cross rivers region. What few know is…
byadmin