STICK FIGHTING, also known as Kalinda, brought to Trinidad via our African ancestors, is a martial art tradition that can be found in Central and West Africa and also among the Oromo people of Ethiopia. Gatka (another form of stick fighting) is a combat training style developed by Sikhs and was brought to Trinidad by indentured labourers from Southern Asia. Stick fighting battles take place in a gayelle (this battle takes place in Moruga). The fighter who draws first blood is declared the victor and the fight is accompanied by a dance known as “carray”, while a chantwell leads the call and response lavway. Source: Melissa Doughty via Newsday Subscribe to our Youtube to keep up to date with our latest content!: IG & Twitter: @scenepresents Facebook: Scene Productions https://www.facebook.com/sceneproduct…​ Shot & Edited by @sharipettiii

tickfighting is an old African tradition, brought to Trinidad by african warriors. It is also called “Creole wood”, “Bois”, and “Bataille Bois”, and is performed by men only. 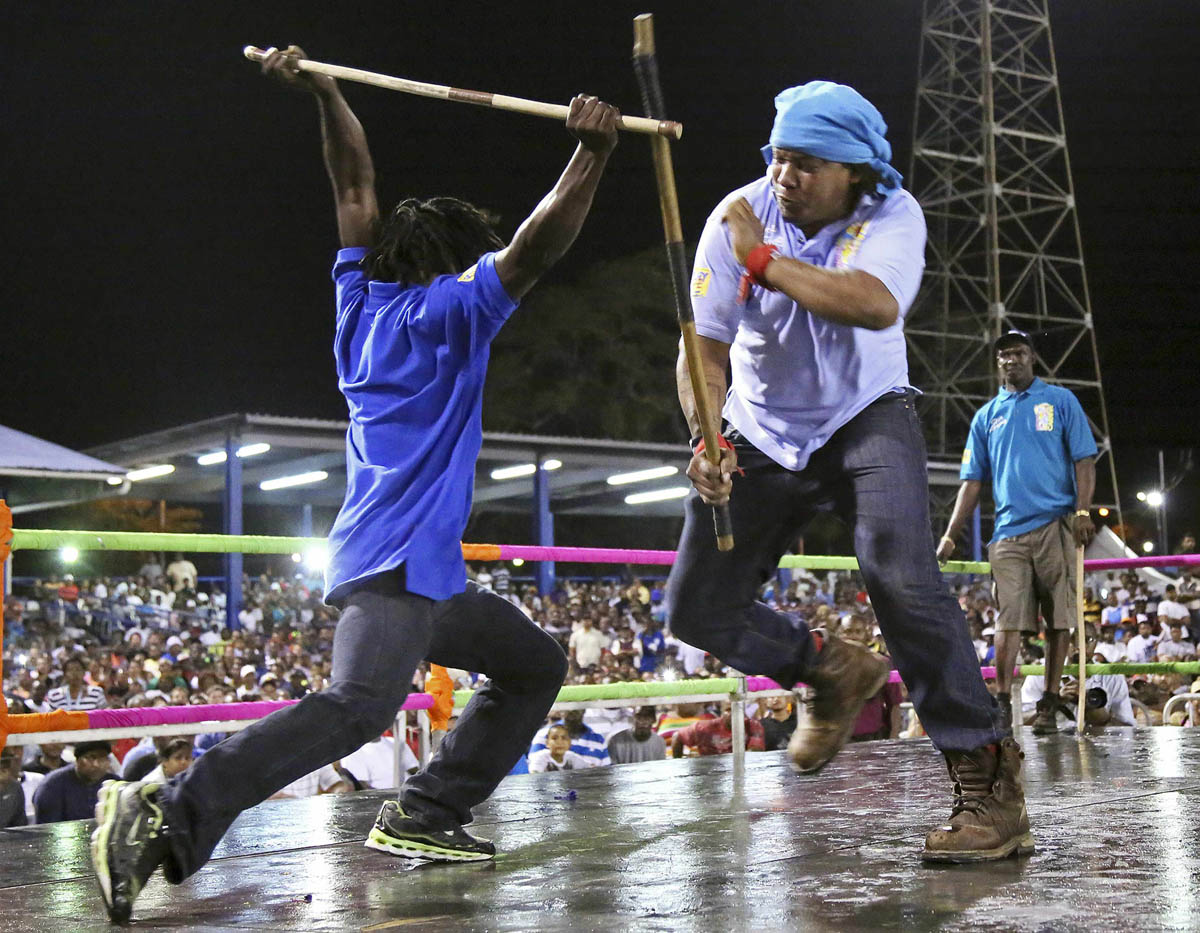 The stick, about one inch in diameter and four feet long, is a piece of cured poui , gaspari or “a-ou-ray. When the drumming starts, one batonniere would throw his stick inside the centre of the ring or gayelles and the rival would accept the challenge by jumping in and waiving his stick.

In TT there are two types of stickfighting tradition: kalinda and gatka. The kalinda which is the form that is observed in National Stickfight Competition. Kalinda is based on martial traditions that can be found in Central and West Africa and also among the Oromo people of Ethiopia.

Gatka is a combat training style developed by Sikhs and brought to Trinidad by indentured labourers from Southern Asia (Afghanistan, India and Pakistan, according to the Ministry of Community Development, Culture and The Arts’ Facebook page.

Variations of kalinda exist from community to community. Different training styles exist and these are based on the style passed on from generation to generation.

The gayelle is the space where the battle between two stickfighters takes place.

The fighter who draws first blood is declared the victor. The fight is accompanied by a dance knows as ‘carray’.

An important part of the gayelle is the music. The chantwell leads the call and response lavway.

Every village has its own chantwell who sings the praises of their champion stickfighter or knows the right song that will bring out the fighter’s warrior spirit. The chantwell is the ‘forefather’ of the calypsonian.

Stickfighting is now an annual part of the TT Carnival calendar.

Kevin Durant: A letter to my neighborhood

The NBA Finals MVP reflects on growing up, giving back and the pleasures of going home I hail…
byadmin

Handel from the Dominican republic, lost his arm at 6 years old to a wall falling on his…
byadmin

The Word of God

I’m so New York, I got robbed in the second grade. Man, who the hellgets robbed when they’re seven years…
byadmin
Total
0
Share